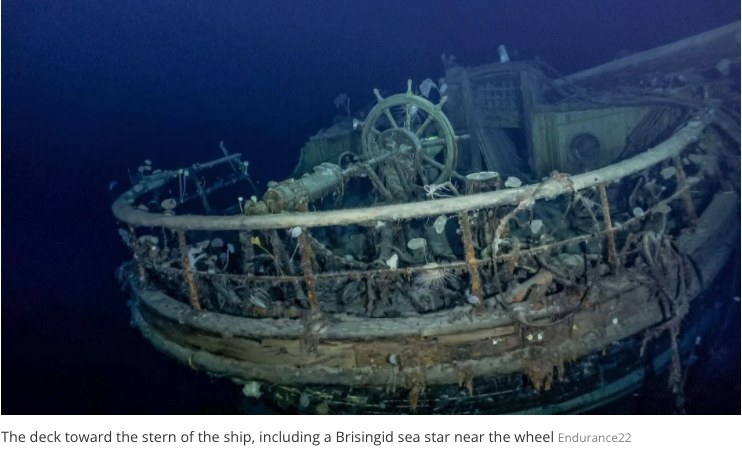 During Ernest Shackleton's 1915 Antarctic expedition, his ship Endurance was crushed by ice. After 106 years, scientists announced last week that the vessel had finally been found.

A team of undersea explorers located the wreck roughly 10,000 feet deep at the bottom of the icy Weddell Sea, just east of the Antarctic Peninsula. As soon as the ships’ rediscovery was announced, scientists jumped at the opportunity to see what life forms have made their home on Endurance.

“The ship is cool, but look at those things living on it,” says Huw Griffiths, a marine biogeographer at the British Antarctic Survey, who was not part of the discovery expedition, to Vox’s Benji Jones.

Undersea cameras revealed the ship’s diverse collection of sea life, including sea stars, sponges, anemones, and sea squirts. Scientists also spotted a deep-sea squat lobster, which has never before been recorded in the area, per Jonathan Amos for BBC.

The 144-foot wooden ship was last seen in 1915 when Shackleton, an Irish-British explorer, was on his quest to reach the South Pole. After Endurance became trapped by sea ice, Shackleton and his team of more than two dozen men waited ten months for the ice the thaw. In the spring, the moving blocks of ice crushed the ship, which then slipped below the surface. Shackleton and his crew were then forced to travel in small boats for an 800-mile journey across the Southern Ocean to the island of South Georgia. All of the crew survived the harrowing expedition.

Despite its age, the sunken vessel has remained in near-pristine condition. The ship provides a rare opportunity to study sea creatures that make their home on hard surfaces. Because the wreck is protected under the terms of the Antarctic Treaty, it is a historic monument.

“There’s been lots of work in the Weddell Sea but mostly on soft bottoms,” says Louise Allcock, a zoologist at the National University of Ireland Galway, to Sabrina Imbler the New York Times. “There is a chance there are new species, if only because of a lack of looking.”

Because no sunlight can reach Endurance's depth, most of the creatures living on and around the ship are filter feeders like sponges and sea stars, which pull edible particles out of the ocean. The footage also revealed a ghostly-white animal that scientists believe is a deep-sea squat lobster. The crab-like animal could be from the genus Munidopsis, which is known to have over 200 species, Griffiths told BBC. A fossil of one species was found on the western side of the Antarctic Peninsula in 2006, but this specimen would be a first for eastern region of the peninsula, Griffiths notes. 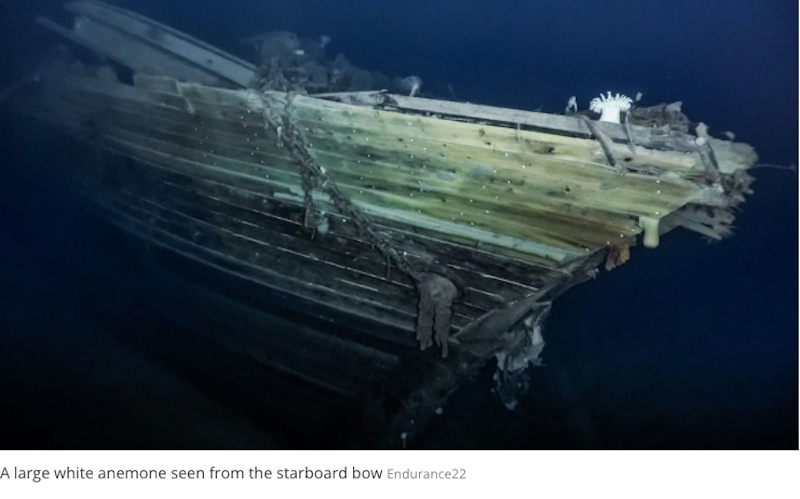 In the footage Griffiths points out stalked animals that are probably glass sponges, and a bright yellow sea-lily, a stalked type of crinoid. Another star of the show was a large white anemone perched behind the wheel of Endurance, looking ready to captain the ship. “The old crew got off alive, and this is who’s moved in,” Griffiths says to the Times. “Who knows where that sea anemone is taking it?”