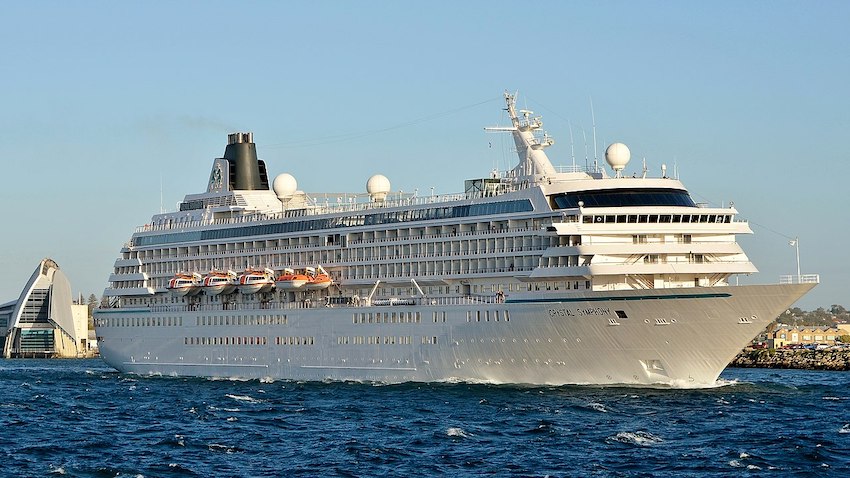 Last week, a federal district court (Judge Darrin P. Gayles) in Miami issued an arrest warrant for the Crystal Symphony because the luxury cruise ship is millions of dollars in arrears in unpaid fuel bills.

Judge Gayles signed the order of seizure which directs U.S. marshals to “arrest the defendant vessel, her boats, tackle, apparel and furniture, engines and appurtenances, and to detain the same in your custody pending further order of the court.”

Peninsula Petroleum Far East filed a lawsuit in Miami last week against the Crystal Symphony, Crystal Cruises and Star Cruises for unpaid fuel bills.
Parent company to Crystal Cruises, Genting Hong Kong, stated last week that it would run out of cash by the end of this month. Crystal Cruises also announced it would suspend operations through April.

The Crystal Symphony was scheduled to end its cruise in Miami but changed course for the Bahamas instead.  The seizure order cannot be enforced outside of the United States. If the owners and/or operators of a legally seized ship do not satisfy the debt that the ship incurred or post a bond, the U.S. Marshall’s Office has authority to sell the ship at auction.

This motivated this cruise line to avoid a U.S. port and evade the arrest warrant for its cruise ship by changing the ship’s itinerary to the feckless islands of the Bahamas.

Passengers were notified of this last minute change of plans. They were advised that they would be taken to the island of Bimini in the Bahamas where a ferry would take them to Florida.

The terms and conditions of the Crystal Cruises’ cruise ticket permits the company to legally change the itinerary of its cruise ships and drop ports of call.  Paragraph nine (9) titled “Itinerary/Right To Change/Detention” states in part:
“Crystal Cruises reserves the right at its sole option and discretion and that of the Captain of the Ship without liability for damages or refund of any kind, to deviate from the Ship’s advertised or ordinary itinerary or route, to delay, advance or cancel any sailing, to omit or change ports of call, to arrange for substantially equivalent transportation by another vessel and/or by other means of transportation, to cause the Guest to disembark from the Ship temporarily or permanently . . .”

The relationship between cruise lines and passengers is largely a matter of contract law.  Cruise lines have diligently spent years drafting one-sided, onerous conditions which their defense lawyers have updated into cruise passenger tickets.

Altering an itinerary to evade an arrest order signed by a Federal District Court judge in Miami to keep your cruise ship from being sold to satisfy millions of dollars in unpaid fuel bills?  Indifferent and powerless countries like the Bahamas, where Crystal registers most of its cruise ships, could not care less. And U.S. travelers who chose a so-called “luxury” cruise line may be disappointed that a company which doesn’t pay its bills and then evades the law would behave like this. But this is business as usual for the cruise lines. And cruise guests unwittingly have already agreed to permit the cruise line to change their cruise itineraries at the company’s sole option and discretion by purchasing their cruise tickets.