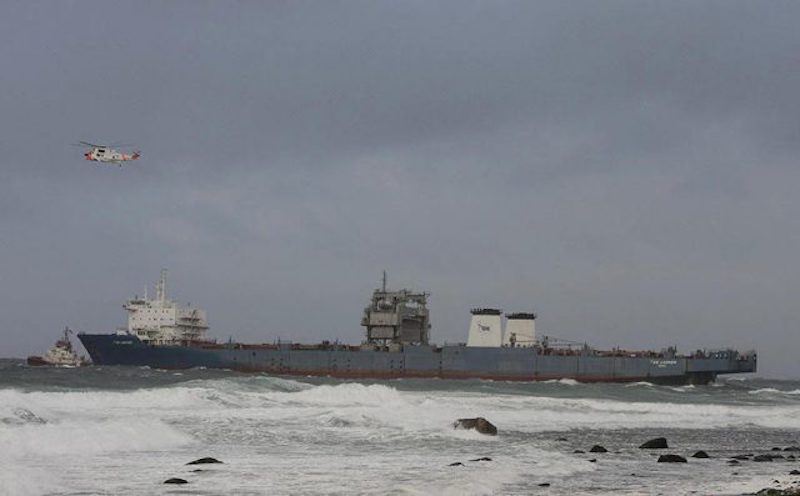 Norwegian shipowner Georg Eide has been sentenced for having aided Singapore-based cash buyer Wirana Shipping in an attempt to export barge carrier Harrier (ex-Tide Carrier) to a scrapyard in Pakistan back in 2017.

A district court in Sunnhordland, Norway convicted the shipowner to six months in prison for trying to illegally send the ship for scrapping on South Asian beaches in violation of Norwegian waste exports regulations. Specifically, Norway prohibits exports of waste from rich to poor countries that don’t have satisfactory systems to handle such waste in an environmentally sound and safe manner.

“Eide has been charged with complicity in violation of international waste law. The judgement acts as a stark warning that dodgy deals with cash buyers aimed at scrapping vessels on South Asian beaches, where there is no capacity and infrastructure to recycle and dispose of hazardous wastes in a safe and environmentally sound manner, is a serious crime,” a spokesperson of NGO Shipbreaking Platform told Offshore Energy-Green Marine in a comment. “It also cautions that due diligence is a must for not only ship owners, but also insurers and Maritime Warranty Surveyors, to avoid any business relationship with companies that have terrible track records.”

In 2019, Norwegian authorities imposed a NOK 7 million ($ 765,000) fine on Wirana Shipping over the company’s role in the disputed dismantling case.

After being laid up for many years on the Norwegian west coast, the vessel almost ran aground in February 2017 as its engine stopped working outside the Norwegian coast of Jaeren, shortly after it set sail for scrapping yards in Pakistan. The Norwegian Coast Guard was forced to trigger a salvage operation.

Acting as a so-called “commercial manager” of the voyage, Wirana attempted to sail the ship illegally to Pakistan without permission from the Norwegian Environment Agency.

Norwegian authorities had allowed the ship to leave Norway based on fraudulent information that the vessel was heading for repair works in Oman.

The 1989-built ship was arrested in April 2017 as Norwegian environmental authorities found evidence indicating the ship was under a “break up voyage” insurance from Norway to Gadani, Pakistan. They also found unidentified and excessive amounts of sludge and fuel oils.

Upon the arrest, the Shipbreaking Platform said that it had contacted the Norwegian owners Eide Group to make them aware of the laws governing end-of-life ships and that exporting the vessel to a South Asian beaching yard would be in breach of the European Waste Shipment Regulation and the UN Basel Convention. Eide Group denied then that the vessel would be scrapped.

The Norwegian Environment Agency said that the ship is not allowed to leave Norway unless it is to sail to a ship recycling destination in line with international and European hazardous waste laws.

This was the first arrest of a vessel for the illegal export of hazardous waste in the country.

The NGO Shipbreaking Platform unveiled reports of the sale in 2015. Before trying to sail to Pakistan, the ship had changed flag and it was renamed, a common practice among cash buyers for end-of-life tonnage.