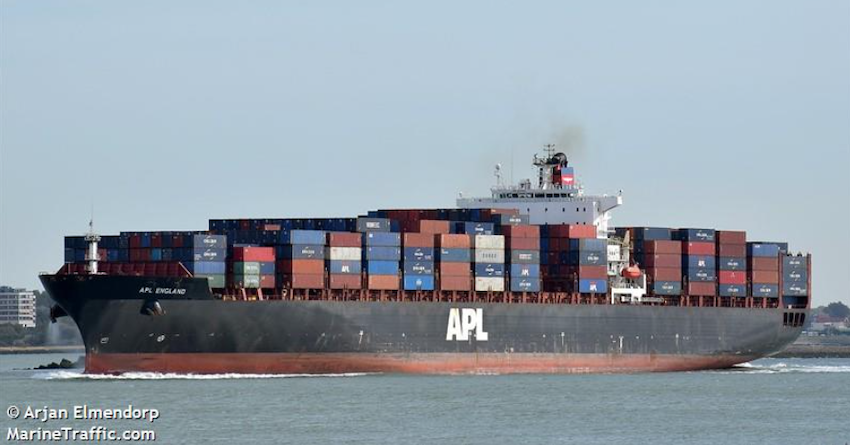 The captain of containership APL ENGLAND (IMO 9218650), which lost containers overboard in a storm in May 2020 has been charged in a court in Brisbane, Australia. The prosecutor failed to make the case for one set of charges against the captain for pollution but the court agreed the captain should face charges of operating the ship in an unseaworthy condition. The Australian Transportation Safety Bureau (ATSB) is continuing its investigation and is yet to release a final report on the incident.

The charges were brought by the Australian Maritime Safety Authority against Mohd Zulkhaili Bin Alias (44), a Malaysian citizen who was in command of the APL ENGLAND at the time of the incident. The captain remains free on bail in Malaysia, awaiting a trial date.

The vessel was sailing from Ningbo, China to Melbourne, Australia when it was hit by gale-force winds and heavy seas about 46nm south-east of Sydney on May 24th 2020.

Come the dawn, the officers found that the ship had lost 50 boxes overboard; a further 63 were damaged, with some hanging over the side of the vessel. It was later determined that 23 of the containers lost overboard were empty, but one contained hazardous cargo consisting of dry powder fire extinguishers. The others had furniture, medical face masks, shields, and various goods. At Brisbane Magistrates Court on January 24th the prosecutors had sought to confirm charges of operating the ship in such a manner to cause pollution or environmental damage and a second charge of dumping garbage into the ocean. It was argued that, under the law, any plastic put into the sea was garbage. The defence responded that it was loaded as cargo and that therefore the ship had not “discharged waste” into the ocean. The court agreed with the defence and threw out the pollution charge.
The prosecution then substituted a charge that the vessel was unseaworthy when it put to sea, a charge with which the court agreed. A preliminary report from the ATSB noted that heavily rusted lashings on the vessel had failed due to wastage. It also pointed to wasted container guides and deck structure, failing lashing eyes, and failed container foundations.

ATSB transport safety investigators boarded the vessel to survey the damaged container stacks, inspect the container lashing equipment, download the vessel data recorder and video recording system, and interview the crew when it docked in Brisbane after the incident.ATSB Chief Commissioner Greg Hood said that “generally, the ship’s lashing equipment appeared in good condition. However, many of the ship fittings, including lashing eyes, lashing bridges and deck structures were found to be heavily corroded and wasted”. The ATSB examination of the container stowage arrangement showed several potential issues, including missing twistlocks and the use of “high cube” as opposed to standard height containers in the ship’s aft-most container bay. ATSB believed that this affected the security of the stow above the container cell guides. They also reported that the loading computer’s lashing and forces checks did not show any conflicts for this arrangement.

The ATSB preliminary report noted that during the morning the vessel had slowed during the storm, but had undergone a series of very heavy rolls, to about 25 degrees either side of upright. A steering system alarm sounded, followed by an engine room alarm that showed main engine piston cooling oil low inlet pressure, prompting an automatic shutdown. The crew recovered quickly. They restarted the engine, with the ship underway sailing with the weather about 10 minutes after the incident.The charges of unseaworthiness related to the load not being securely and properly tied down in China so that they met the “ordinary perils of a voyage.”

The vessel is now named the ZIM HAIFA (since August 2021) and is Liberia-flagged. It is owned by Klaipeda Maritime LLC care of manager Conchart Commercial Inc of Athens, Greece. It is entered with UK Club on behalf of Klaipeda Maritime LLC. From December 2020 to the end of July 2021 the vessel was known as the TORRANCE, although its ownership and managing was the same as for the ZIM HAIFA